Welcome to the second installment of Fintech News and Notes! A thoughtful summary of the most important trends and updates across fintech, written by our very own Eric Weingarten. 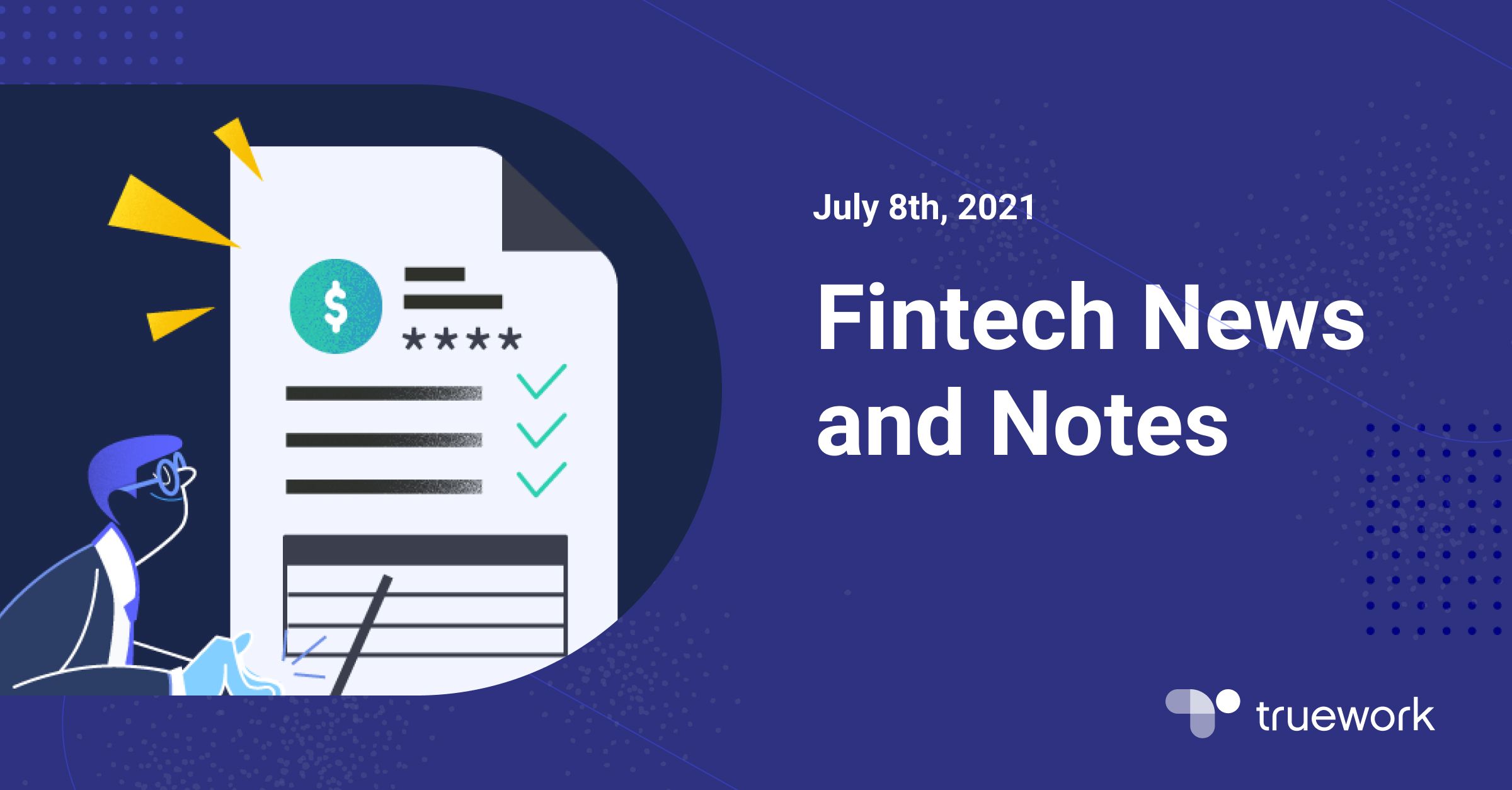 3 Things On Our Radar

-Lina Khan worked for Rohit Chopra (President Biden’s nominee to head the CFPB) as a legal advisor when he was himself a Commissioner at the FTC. Prior to her appointment, she served as counsel to the House Judiciary Committee's Subcommittee on Antitrust, Commercial, and Administrative Law.

-From her time prior to law school and after, Chair Khan’s professional focus has been competition issues in tech. Of particular note, Khan’s article, “Amazon's Antitrust Paradox”, published in 2017 in the Yale Law Journal has become a keystone in reframing the debate on how anticompetitive behavior should be assessed in the internet platform era. Khan argues that low prices otherwise viewed as competitive should instead be viewed as a possible predatory wedge pushing out competition across the platform, limiting consumer choice more broadly.

-While Amazon petitioned for Khan’s recusal on matters regarding Amazon itself, we expect Khan’s FTC to apply her view more broadly that determination of anti-competitive behavior must look beyond simplistic short-term price impacts, focusing instead on how predatory pricing may provide internet platforms unfair leverage to integrate disparate business lines in an anticompetitive manner. We will monitor this closely, as a growing number of fintechs pursue growth through platformization, seeking to win by diversifying into a wide array of business lines.

-In 2020, the OCC issued a rule (known as the “True Lender Rule”) clarifying which party is the lender of record when a loan originates out of a lending partnership between a bank and third party. Prior to this rule there were different interpretations applied by courts to resolve this question.

-That said, this rule was particularly helpful to fintechs developing new lending products on a national level, partnering with banks chartered by the OCC. This would have provided regulatory clarity, facilitating more efficient (lower) pricing when banks securitized these loans in the secondary market. That savings would then be passed on to borrowers in the form of lower rates.

-Affirm, LendingClub, Oportun, PayPal Holdings, Square, Varo Bank, and the National Community Reinvestment Coalition sent a letter to the CFPB seeking guidance on how to use artificial intelligence in lending decisions without violating fair-lending laws.

-There has been heated debate - within the marketplace and amongst policymakers - on whether using artificial intelligence in credit underwriting breaks down or reinforces systemic barriers to financial access.

-In November 2020 the CFPB issued a watershed no-action letter to Upstart declaring that Upstart’s use of artificial intelligence in pricing and underwriting loans complied with fair-lending considerations. That no-action letter only applied to Upstart and the narrow set of facts it presented.

-The guidance sought by Affirm, et al, goes one step further. This group asks the CFPB to apply stringent ‘disparate impact’ (i.e., unintentional discrimination) standards to all lending made via artificial intelligence and machine learning. They argue that only when such strict standards are applied will lending via these methods truly meet the stated goals of providing broader financial access:

“Preventing discrimination in the use of algorithms and predictive models is crucial for a fair financial system in the digital age….[A] regulatory framework that can truly address the risk of digital discrimination, while also promoting technology and data innovation...has the potential to increase financial inclusion and lower prices for consumers.”

-Definitive guidance from the CFPB on this issue may very well encourage further new market entrants, new products, and integration with new technologies, including decentralized finance (check out this primer for further reading on DeFi).

-As we previewed two weeks ago, this past week the House Financial Services Committee held a hearing titled: “A Biased, Broken System: Examining Proposals to Overhaul Credit Reporting to Achieve Equity”

-Our big takeaway from the hearing is that while there were stark differences in approach, Democrats and Republicans are equally frustrated with deficiencies in the current credit reporting system, including disparities in financial access, concerns over data security, and systemic bias. We find this fascinating in light of the typical polarization between the parties.

-Republicans raised concerns about the ability of the federal government to adequately protect consumer data, while Democrats pointed to recent high profile credit bureau data leaks as evidence that security concerns apply to both public and private sector participants.

-Representatives from both parties agreed that use of alternative data to make credit decisions, e.g., cash flow data, utility bill payment, should be used to provide a more inclusive view of creditworthiness.

-For now: “Watch this space”. While other Democratic priorities and mixed support might stall significant changes like a public credit bureau, there are a number of credit reform concepts that appear to have at least conceptual bilateral support, including use of alternative data, alternative scoring, and increased data security/privacy. We will stay close to legislative developments and will report on them as they happen.

Join the group of 15,000 organizations that use Truework to increase applicant conversion with faster income and employment verifications.