Welcome to the newest installment of Fintech News and Notes! A thoughtful summary of the most important trends and updates across Fintech, written by our very own Eric Weingarten. 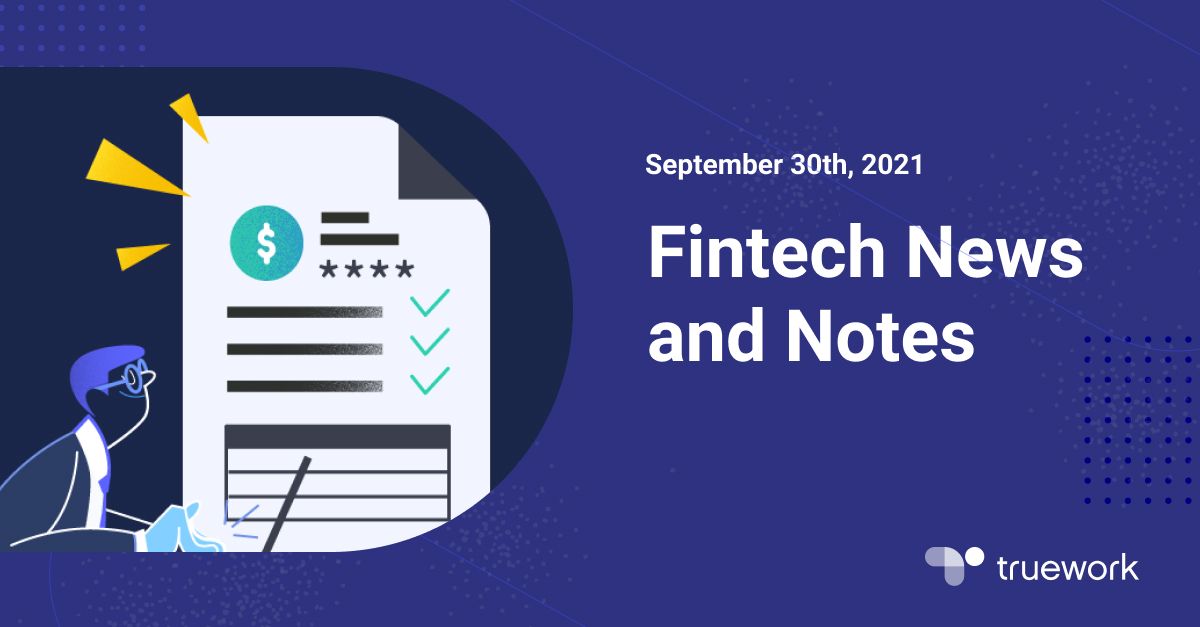 3 Things on Our Radar

-In her legal scholarship Omarava has been critical of fintech and the permissive approach to regulating large financial institutions (including taxpayer funded bailouts). More radically, Omarova has proposed that the Federal Reserve (which essentially acts as the “bank for banks” in the US) be authorized to directly take consumer deposits, essentially creating a public consumer bank.

-While Omarova wouldn’t be able to enact that sort of dramatic change at the OCC, her nomination provoked disparately strong (both negative and positive) reactions. As demonstrated under the previous Comptroller - Brian Brooks, who pushed a number of significant policy initiatives, including crypto stablecoins, the True Lender Rule and innovative fintech charters - the OCC can have a material impact on how banks operate directionally, not just at mechanical level.

-Omarva’s nomination triggered strong reactions on both sides of the aisle in DC. We expect Omarova’s nomination to be a significant and public debate between a variety of constituencies.

-Last week the nomination of Rohit Chopra (current FTC Commissioner) to lead the CFPB moved forward, with a full Senate vote expected within the next week or so.

-As we mentioned in Blog #2, the current Chair of the FTC is Lina Khan, who worked as a legal advisor to Chopra while he was at the FTC. Khan and Chopra are very much kindred spirits, both being strong advocates of using aggressive regulatory enforcement as a policy tool to ensure industry compliance and consumer protection.

-In light of that professional relationship and the Biden Administration’s broader initiative on regulatory coordination (exemplified by the President’s sweeping multi-agency competition policy executive order), we expect that the FTC and CFPB to coordinate more closely on policy and enforcement matters than they have in the past. The CFPB, established in 2011 pursuant to the Dodd-Frank Act, took over for the FTC on a number of consumer financial protection regulatory workstreams. This removal of oversight authority created friction between the two agencies.

-Possible areas of coordination under may include: competition law enforcement, auto lending (which is currently carved-out from CFPB authority), and fintech M&A.

-Earlier this month, Rodney Hood, former Chair and current board member of the National Credit Union Administration (NCUA), spoke on the NCUA’s push for credit unions to embrace the use of technology.

-Speaking at the National Association of Federally-Insured Credit Unions (NAFCU) 2021 Congressional Caucus, Hood emphasized the work that the NCUA’s Office of Innovation and Access (proposed by Hood when he was Chair of the NCUA) will be doing to assist credit unions in order to help them take advantage of fintech.

-Hood emphasized how utilization of technology can bring direct benefits to credit union members and that the NCUA “[e]ncourag[es] more uptake of innovative financial technology solutions by credit unions to help [them] to keep pace with the changing marketplace and to better meet [their] members’ needs.”

-Hood further stated, “[c]redit unions are always looking for new innovative solutions, new companies, new fintech...what we can do to better serve you is give you the regulatory empowerment and freedom you need to take part in this burgeoning growth of fintech.”

-As we previewed in Blog #6, last week the US House Financial Services Committee’s Task Force on Financial Technology held a hearing entitled: “Preserving the Right of Consumers to Access Personal Financial Data”. This hearing ostensibly focused on implementation of Section 1033 of the Dodd-Frank Act.

-In his introductory remarks, the Chair of the Task Force (Stephen Lynch D-MA), emphasized the need for more clarity between the many laws governing financial data, including the Gramm-Leach-Bliley Act (GLBA), the Dodd-Frank Act (DFA), the Fair Credit Reporting Act (FCRA,) and the Equal Credit Opportunity Act (ECOA). Other members expressed similar concerns.

-There was broad bipartisan agreement on the need to provide consumers with control over their financial data, particularly the need for consumers to consent more specifically than they do today over how their data is used. That said, similar to the debate around credit reform, there was disagreement over how that access should be implemented: e.g., opt-out v opt-in, universal API v broad technical requirements, government mandated security rules vs. industry driven standards.

-While there was disagreement on a variety of matters, there was bipartisan concern over screen scraping. Despite that concern, there was recognition that - as one hearing witness described - the practice of screen scraping will continue until all consumers have unfettered access to their financial data. Some members advocated moving to a standardized universal API format to facilitate that transition, while others pushed for mandatory consumer disclosures so that consumers understand what services they are obtaining when utilizing scraping.

-Representative Ritchie Torres (D-NY) expressed concern over large banks making independent decisions over how consumer financial data can be shared while at the same time calling for express regulation (particularly in the area of cybersecurity) of data aggregators and others that facilitate consumer access and use of financial data.

-We expect this conversation to continue and accelerate as the CFPB moves toward issuing a 1033 rule later this year or early next.

Another in the series of reports by the CFPB on the financial impacts of COVID, concluding that while renters benefited more than homeowners from governmental stimulus programs during the pandemic, this cohort might also be disproportionately harmed by the impending end of these programs.

As part of a broader series of factual backgrounders published by the Financial Technology Association (FTA), an accessible summary of the core components of open banking and relevant facts regarding how open banking is being implemented in the United States and around the world.

As further exposition on how “every company will become a fintech”, Toast’s S-1 is a fascinating read; Toast started by developing a restaurant-focused point of sale payment system, evolving into a full-service digital operating platform for restaurants, covering functions as disparate as ordering, delivery, marketing, loyalty programs, management, and payroll.