Welcome to the newest installment of Fintech News and Notes! A thoughtful summary of the most important trends and updates across fintech, written by our very own Eric Weingarten. 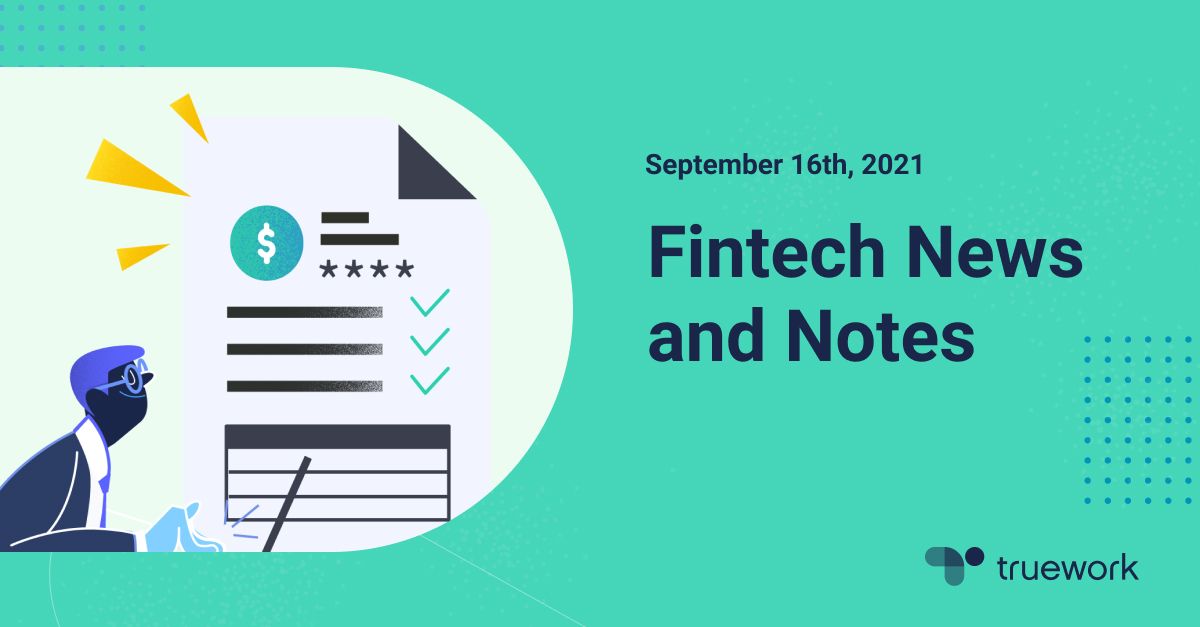 3 Things on Our Radar

-We’ve spent quite a bit of time focusing on BNPL in this space (see below for a link to an interview with the CEO of Affirm) and for good reason. Acquisitions, new entrants, partnerships, and integrations are accelerating on a weekly basis. BNPL is rapidly becoming a table stakes payment option for any competitive merchant.

-One aspect that we have not yet addressed is repayment performance of these products.There is increasing evidence that late payments and defaults are rising in BNPL. But why?

-While we are not aware of any detailed studies of the trend, we have developed a few theories based on anecdotal evidence. We think a mix of new underwriting models (which are less tested at scale), a lack of regulatory requirements, intense competition, and higher loss tolerance in an effort to gain market share are resulting in conditions ripe for a disconnect between risk assessment, pricing, and approvals.

-We believe that as this payment method matures, better understanding of the interplay between each of these variables will also mature and help inform how BNPL will be regulated. Apart from better tailored regulation, we believe that BNPL offerings will be increasingly predicated on more sophisticated cash-flow and income based underwriting (and the increasing availability of this consumer data via open finance initiatives).

-Adrienne Harris is a well known fintech advisor, investor, professor and policy advocate. Of note, she served as lead fintech advisor to President Obama and assisted on the Biden-Harris transition team. She has frequently questioned traditional bureaucratic and technocratic approaches to regulation, advocating for a more collaborative relationship between regulators and industry. Harris has spoken a number of times on the need to be outcome driven (e.g., financial inclusion) in order to develop regulation that better protects consumers, fosters innovation and achieves specific end goals.

-NYDFS is widely viewed as a very conservative financial regulator, typically led by incumbent industry professionals. Harris’ appointment can be seen as nothing short of revolutionary, eliciting strong reactions both positive and negative. -We will closely watch the beginning of Harris’ tenure and its implications on a host of core fintech regulatory initiatives, including financial data access, fintech charters and crypto.

-Last month we reported on the unified guidance proposed by the Federal Reserve, the FDIC and the OCC on how banks should manage risks presented by third-party relationships. These relationships increasingly include the partnerships and other business relationships that banks are entering into with fintechs. These relationships enable fintechs to offer regulated banking services within their products and services.

-In light of the extensive interest in these guidelines, this past week the deadline for comments on this proposal was extended a month until mid-October.

-As we mentioned previously, we see this guidance as dovetailing with the CFPB’s expected rulemaking to be proposed for consumer financial access under Section 1033 of the Dodd-Frank Act. We expect those rules to be proposed by the CFPB later this year or early next.

-In the Apple v. Epic Games case last week the US district court found that, while Apple wasn’t acting as a monopoly in running its App Store, Apple did engage in anti-competitive (“unfair”) conduct under California’s competition laws.

-While the legal arguments are somewhat complex, Apple’s anti-steering rules prohibiting apps from directing users to complete transactions off-app amounted to activity that threatened an “incipient” antitrust violation. In simple terms, Apple’s activity, if allowed to continue, would likely result in Apple gaining market power and committing an antitrust violation. Under California law, that likelihood in and of itself is viewed - as the court deemed here - as unfair and harmful to competition.

-We think the implication for fintech lies in how fintech functionality - e.g., payments, banking, credit, identity verification - is rapidly being layered into existing marketplace platforms. This is a part of the “every business will become a fintech” trend.

-As marketplace platforms integrate financial primitives directly into their products, platform owned, controlled, or partnered financial functionality (e.g., BNPL) may either be favored or competitor products may be disallowed. For platforms that become ubiquitous, not unlike the App Store, we think that it is in these integrations that preferential treatment or exclusive access could create conditions sufficient to give rise to “incipient” antitrust violations similar to that found by the court in Apple v. Epic. This could become more acute as these platforms increasingly move higher up the financial stack, developing financial “superapps” designed to capture a greater scope of their customers’ financial lives and keep customers ‘on-platform’. The development of open finance and the implementation of Section 1033 may counter these concerns, but that is mere speculation at this early stage.

This study published by the Federal Trade Commission - commenced last year - looks at non-regulator reviewed M&A activity (i.e., transactions that did not trigger regulatory approval requirements) of Google, Amazon, Apple, Facebook, and Microsoft; no conclusions are drawn, but the depth and breadth of M&A activity is revealing.

Published by Roll Call, an interview with Penny Lee, the new CEO of the Financial Technology Association (of which Truework is a founding member), providing a good overview of the FTA’s engagement focused approach to fintech advocacy.

Affirm Says It Is More Buyer Than Seller

Continuing our tracking of BNPL developments, published in The Information, this interview of Affirm CEO Max Levchin is a must-read counterpoint to the prevailing narrative that BNPL is a payment feature and not a standalone business.

A best practices primer from the Federal Reserve written for community banks to guide them in integrating fintech partnerships, including operational, consumer-oriented, and front-end partnerships.